With Frosty and Louise on board, we are putting a lot of miles under our belt. We left Malta and sailed north to Siracusa, where we stocked up on food and drink and sent Louise and Frosty in to Ortigia Island to wander the Triqs or small streets of the historic center. They promised they didn’t miss one. We had a lovely seafood dinner in the narrowest of alleys, with tables running down either side, so that the waiters and passersby had to turn sideways to move by.

We left Siracusa at dawn, the white stoned city was awash with the dawn’s rosy red light.

On passage, you are motor sailing or sailing, not really stopping until late afternoon or sunset. Time is passed by seeing other vessels and creatures of the sea.

First the creatures, yesterday we saw two Beluga whales, they were very snub nosed and a bit mottled in colour, not pure white.  They crossed our bow so languidly, we had to change course, so as not to collide. They were beautiful in the clear blue Ionian Sea. Sadly no photos, the seas were confused and the cockpit wet, so all the electronics were down below.  We had a great sail, 8 knots for seven hours in a very confused seaway.  Mercier handled it well.

We have seen many flying fish and the dolphins have been coming over most days for a cursory nod hello, before returning to herding fish. We have also seen a sunfish.  First thinking we were seeing a shark, it flipped over and we could see it was a sunfish.  Happy we didn’t hit it as they eat jellyfish, that has to be a good thing.  How do we get a sunfish into Jerusalem Bay to clean up some of those jellyfish?

Here are some photos of vessels who have made our day.  Our Bling boat was a Pirate Go-Fast motor boat.  Our image of a drug smuggler’s boat. We didn’t think he was running drugs or cigarettes, as the gold varnish and the panther on the side made him infinitely identifiable.  As he passed us, he revved his engine to give us a rooster tail of great shimmering plummage.

As we are sailing, the horizon is misty and a big ship will look like a silouhette until it comes a bit closer. This ship looked like a tower block.   The procedure is to quickly check the plotter and see if the ship is named on AIS (Automated Identification System). This hulk wasn’t but James and Frosty got out the binoculars and decided that perhaps it may be a military vessel.  Our AIS reports that we may be on a collision course of within 11 – 50 metres.

Another check on the AIS, which now gives us a number, far short of the usual identifier, momentarily it changes again and it says “French Naval Warship”.  We were then perused by their helicopter, which we could see take off from the ship and then circle us and then circle a wider perimeter.

Frosty will give us a replay of the radio conversation.

At the same time, we were within a mile of Italian territorial waters, and an Italian tanker was approaching us on a reciprocal course.  The French were approaching from starboard. The tanker called up on channel 16 “French Naval Warship, this is tanker Mercator, what are your intentions”

“Er, Um, I canta do that, there is this sailing sheep”

“No, ees not possible, there is a sailing sheep in the way, I will hold my course”

By that time, we had altered course to starboard, and slowed down, just as the French sped up and announced that they would alter course to port.

It all passed without any collision, but the Italians were not keen to give way to the French within a mile of their own territorial waters, and it was good to know we rated as a “sailing sheep”.  It was a small bit of excitement to break the monotony of a long passage.

Happy Belated Birthday, Graham Bradley – forgive us for being late, but we lost connectivity for awhile there. Congratulations on being named head of Infrastructure NSW, we can sigh in relief knowing NSW will be in better shape when we return.

In case, we lose connectivity again, Happy Birthday to my cousins, Ed De Angelo Jerry Johnson and Erin Gaffney, as well as our Greats Iris and Raffy. We wish all you July babies a very happy day. 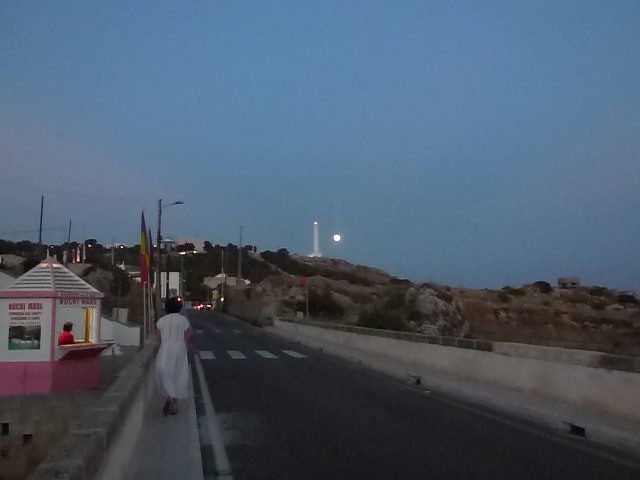 One thought on “Passage in Southern Italy”