It doesn’t take a very long stay in Australia, before you hear about Snugglepot and Cuddlepie or the big Bad Banksia men.  No generic fairies here but botanically correct adorable little creatures that were fashioned on Eucalyptus gumnuts and their flowers.  The Banksia men were drawn from Banksia cones that dry on the branch for up to three years and become very wizened.  It seems it was easy for Gibbs to fashion these old cones into wicked old men. who might threaten her Gumnut babies. All of their adventures are captured in books by Gibbs and also in a Sunday cartoon.

May Gibbs came out from England with her artist parents at the age of four.  She was a children’s author, illustrationist and cartoonist. She was the happy owner of Scottish terriers and lived with the Scotties and her husband at Nutcote in Neutral Bay.  James and I went to have a look at Nutcote on Sunday and drop in on the Scotties’ Birthday party.

Nutcote was a small but perfect house created for May Gibbs and her husband Bertram Kelly, by architect, BJ Waterhouse.  It had waterviews from most of the rooms and a lovely balcony overlooking the water.  Breezes waft amiably through the house to counter act Sydney’s warm summer weather and it had all the modern conveniences of the time, including indoor plumbing.

Children were blowing bubbles and Scotties were running around.  Over the PA, came the announcement ” Please remember to use gloves to separate dueling Scotties”.  We did hear a bit of barking but the Scotties were on their best behavior. 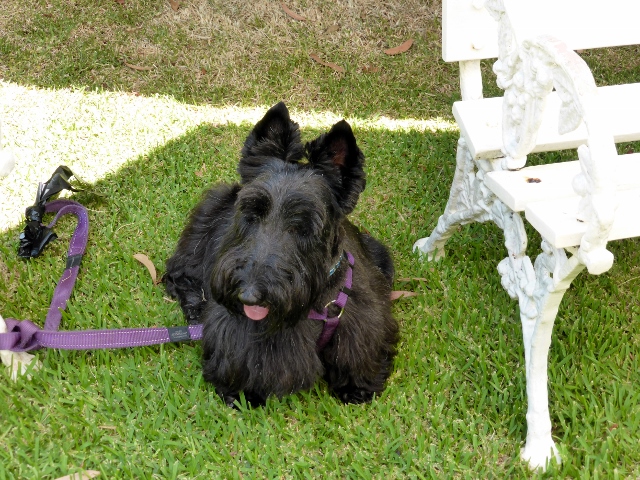 The Teahouse had wonderful cupcakes, Icy pops and Teas on offer. May Gibb’s Nutcote is a secret and enchanting place to visit with your own Scotty or little gumnut baby.  As we left, a group of children from Liverpool arrived, not only was it their first time to the Scotties’ Birthday party but their first time over the Harbour Bridge. We think they rather enjoyed it.

What did you do on the weekend?

We had an action packed weekend.  The two highlights were celebrating Debbie’s birthday and watching the Godson racing Farr 40’s.

To misquote Ms. Ephron, birthdays aren’t for the faint of heart but friends help us through them.  Several of Debbie’s BFFs met for breakfast at a very secret Sydney location, Echo on the Marina in Roseville. Entertainment was provided by Possum Magic and numerous coffees fueled the laughter and giggles around the table.

Glad you had a great birthday weekend, Deb.  Wishing you many more.

David was racing later in the morning on Voodoo Chile, so several of us went out on the Nand V, to cheer him on.  Rene in fact, had son David on Voodoo Chile, brother Bobby on Transfusion and nephew Nathan on Sputnik. We had three teams to cheer on.

Sydney Harbour was full of boats on the Saturday, Ynglings, Etchells, 18’s, lasers and Farr 40’s.  The Farr 40 racing was close and there were times the wind was fairly fresh. Here are some of the photos.

Transfusion was the winner of the 10 race regatta, with Voodoo Chile finishing 5th after 2 disappointing races where they finished first, but were later disqualified or withdrew.

James and I joined several friends for the annual Pizza Party at the KMYC on New Year’s Day. This is the best view from a Pizza oven anywhere in the world, overlooking Cowan Creek, boats passing, sea planes landing and friends sampling the homemade pizzas.

On Saturday, we walked around Cremorne Point, a peninsula to the Northeast of the Sydney Opera House.  The views across to the city are quite beautiful, although the clouds gave everything a silver glow rather than the usual blue sky.

On Monday, we went up to Palm Beach to visit Trina, Aunty Gwen and Baby Bunty.  We had a lovely afternoon with them.  On the way home, we took the scenic road and took photos of Whale Beach and the headland. That was a blue sky day.

The way forward in 2014, for James and I seems to have a theme of embracing family, friends and experiences.  We had great Christmas eve, Christmas Day and Boxing Day get-togethers with family and friends.

Although Mercier is safely tucked away on a hard stand in Croatia, we have shared plenty of time on the water with good friends.  The sailing season resumes in January and we hope to do Tuesday and Friday Twilights on Jackie Clare followed by Saturday club racing for James on Impetuous Too. We will be looking at what to do in Sydney for our gap year and how to structure our days. Our longs walks on the shores of the Med are sorely missed.  The passeggiata is such a wonderful time of day, social as well as aiding fitness. We will try to fit them into our day here in Sydney, walks through the nearby suburbs, along the water and through the bush.

So Happy 2014, hopefully this year will bring health, happiness and adventure to all our friends and family. We look forward to speaking to you, seeing you or even just sending an email.  Good Luck to my sister, Linda and brother-in-law Rick, moving from desert to mountains later in 2014 sounds pretty exciting.