We have more Istanbul fun to share, so we are going with fewer words more photos.

1) We tried new food and drinks. Here we are lining up to try pomegranate juice. We were walking back to Sultanahmet, after we had been to the Grand Bazaar. The pomegranates were picture perfect. 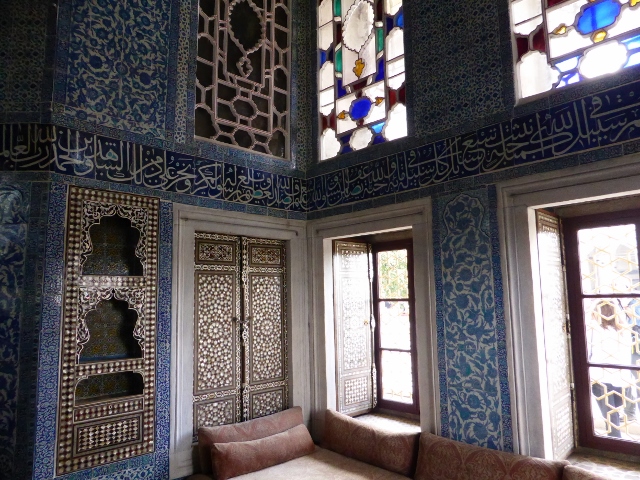 3) We visited the Spice Market and the Grand Bazaar, to see shops full of fruit & nuts to gold.

4) We missed the demonstration at Taksim Square, but this small boy hanging on to the trolley gave me palpitations.

5) There are so many churches in Europe.  In Istanbul, we visited mosques and listened to the call to prayer. You feel transported to a more exotic location just by hearing it. In Istanbul we saw young women in scarves together or with friends in completely secular, modern clothing. There were a few burqas but I had the feeling they were sightseers like me from other countries.

6) We met the nicest Turkish people. They are friendly and proud of Turkey. Here we met lovely work colleagues who insisted we share Pandeli’s famous walnut cookies to have with our coffee. We had a great conversation and we were warmed by Turkish hospitality in Istanbul and all through Turkey.

Not really street food because they cook it straight from the boat, ‘Balik ekmik’ – Fish in bread, with a big serve of onions. For over a hundred years, the fisherman had been bringing their catch here from the sea of Marmara and the Bosporus Strait.  At some stage they decided to value add and serve the fish cooked. This is right at the Galata Bridge underneath the gaze of the New Mosque.

9) Visited Galata Tower in Karakoy. This medieval stone tower was built as Christea Turris by crusaders from Genoa in 1348. The nine story tower is a quick tram stop over the Galata Bridge from Sultanahmet. You have a 360 degree views of Istanbul and the Bosporus Strait. The coffee shop on the square at the bottom of the Tower was the best coffee we had in Turkey.

The interior of the Blue Mosque is still a mystery to us, because we couldn’t make ourselves wait for the two-hour queue, even at 8:00 am. We saw it from so many other angles, but not the interior. Suggestions on beating the queue will be happily received.

That is probably it for Istanbul and Turkey until next April, but thank you for joining us.

The next post is all Sydney. Hooroo til then!

We had a few more things to talk about in Istanbul.  Now that we are back at home and respectably moved in, I thought I would share a few more photos. While I am sure I should blog in order, I enjoyed this museum so much we will start here.

One of the first things you should do in Istanbul is buy a 3 Day museum pass and you can have entry without queuing for tickets at each site. Having said that the museum pass doesn’t include the carpet museum.  The carpet museum at Haghia Sophia is absolutely worth a visit and if you go early, as we did you will have the museum to yourself with the guard’s full attention, which was wonderful because he shared his knowledge of the rugs and carpets with us.

Louise and Frosty were scouting out Istanbul and sending us wonderful tips, including visiting the Carpet museum. Their photos convinced us it was worth a visit.

The Carpet Museum is now housed in the circa 1742 Imaret attached to the rear of Haghia Sophia, immediately adjoining the Sultanahmet entrance to the Topkapi Palace and the Ahmet lll fountain. The Imaret was used as a soup kitchen for the poor with sinks, ovens and stoves to prepare food for the poor.

If you have children or you are still a kid at heart, you will enjoy the interactive carpet on the floor in front of the oven. As you walk over this space the tiles illuminate a carpet under your feet. Our wonderful guide showed James how to spread his arms to attain the full effect. There was a bit of laughter as these two men tried to assist me in getting the perfect photo.

There are plenty of English displays, so you learn about the different carpets with the aid of our very able guide. We enjoyed this museum and we loved the fact that we were able to learn more about the carpets, musing about how long they have survived.