At Alexandra Island, we  Aussie and other guests, quickly became aware of how hospitable our hosts were. Yachts came into the pontoon over the next several hours, with the first order of business being a Green box. In the parlance of the Pacific Northwest, a green box seems to be a combination of Aussie BYOB and maybe a Greek meze.  In Australia, we meet on our boats most often but at the Outstations, we could all congregate on the dock. 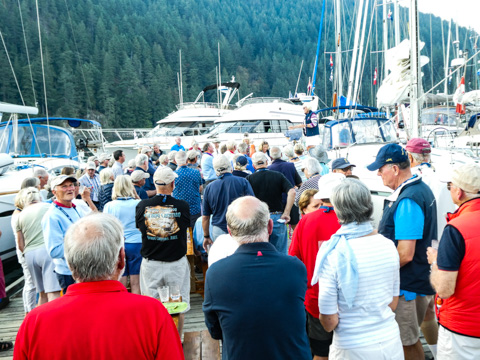 Pam and Chuck Lowry and Val and John Robertson co-chaired our ICOYC Cruise and the amount of effort both couples had put in was patently evident. The main event at our Green box was Pam awarding all the boats their own windsock. There was a story to every windsock and there was no doubt how much work had gone into it.

Enchanted crew walked on the island’s paths and visited the small pavilion. The views were  also lovely from the top of the hill. 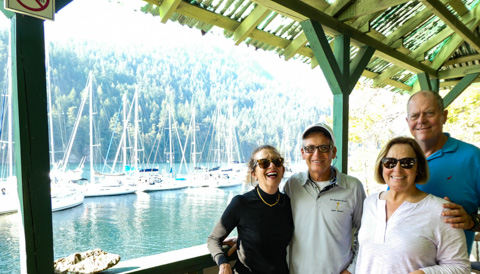 The next morning, we were off to the Harmony Islands, with half the ICOYC group and two capable Captains to make sure we all arrived. But tonight we were all eating steaks underneath the Northern stars.

Ilyas Kaplan from Sanem Tourizm took us on our very own boat, from Ekcinik Koyu, to the Dalyan Delta.  Ilyas dropped us off for a tractor ride up to Caunos, after our walk through the ruins, he collected us and we went on to the town of Dalyan for lunch and a visit to the market.

I am sure Dalyan is a lovely town nine months of the year but in the heat of August, we strolled rather languidly around the ‘market’, which was tourist trap central. We thought it better to spend our time eating mezes in a waterfront cafe. Actas. While watching all the river boats, we considered going to the thermal baths with the other thousands of tourists that were now pouring in from the Lake and even on tours by road or boat from Marmaris, Gocek and Fetiyhe, but the sheer numbers kept us in the restaurant with baklava.

From Actas Restaurant, the Lycian Tombs were directly above us.  The Lycian Tombs were tombs created high on the cliff with an edifice that looked like a temple, a house or a pigeon hole. Ilyas said the large temple tombs were known to be the tomb of a Prince but it seems all the Lycians were practitioners of ancestor worship. The tombs are amazing, such a romantic setting which set our imaginations racing.

We boarded the river boat once more and headed back down to the Turtle area, where we collected our freshly cooked crab for a return trip snack and then off to the sand bar for a swim.

From the morning’s almost deserted journey, now there were hundreds of people at the sand bar beach.

Now this story has been in two parts, most people would have gone back to their boat and had a quiet little drink.  We all know Blue though, we went to dinner and Blue asked how something was cooked and before you know, he is there offering advice to the chef.  They just told him to cook it.

We have been travelling for a month and first we were so busy with friends and family in the States, we didn’t blog.  Recently, when we tried to blog, WordPress was having problems. Today we have had the information and time to get back on track.

We arrived in Dubrovnik on the 30th  April to the news to Mercier was going to be held up in getting back into the water.  Up to ten days was the likely new timetable, but luckily there were some Poms who were desperate to get their boat into the water and they persuaded ACI to get both yachts into the water on Sunday, when they wouldn’t be working on the hard stand.  They literally had to dig a channel out with the bobcat, so Mercier could motor through.

We had a few days to get organised and then we left for a night at Calypso’s in Polace on Miljet and over to Ubli on the island of Lastovo, where we checked out of Croatia and sailed across to Vieste, Italy on Wednesday.

The island of Lastovo is one of the most westerly points of Croatia and we spent our last night in a tiny cove with a submarine bunker on a perfectly quiet night, not even a wave against the hull.

Vieste, Italy was a lovely, if long,  day sail from Lastovo, almost entirely without use of the engine.  If Lastovo had been quiet, Vieste was lively with the feast of Mary of the Merino being celebrated and the whole town out for the procession of the statue of Mary.

The next day, we started our Italian provisioning strategies in Vieste. We circumnavigated the entire town looking for Sim cards, cheese, spices and wine.  The Fornaio or bakery rivaled any on Arthur Avenue, tremendous bread from old large woodfired ovens.

The day was beautiful and we saw a sign offering Spritz by the sea, James and I understood at once, Spring was in the air and the season was starting.