M is a very unusual Super Yacht.  It has an inverted bow, which makes it look like one half of a large catamaran. Google it to see the bow, what would an inverted bow add to performance?

Early this morning in Fethiye, James and I are saying, ” Is that Frosty snoring?” No, Frosty doesn’t snore. It was a man sleeping in the cockpit on the boat next door and here are where his fellow crew members were forced to sleep: on the bow, where the noise of the traffic might drown out the constant but sonorous snoring from their friend.

I said I understood their reasoning for sleeping on the bow and they burst out laughing, These lovely Russian ladies are part of a flotilla of five and usually sail on dinghies at home. They said Mr Snorer was a lovely guy. 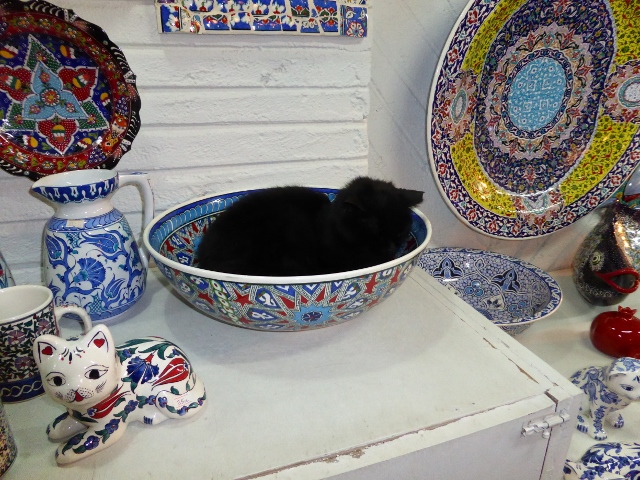 Now that I have shown two boat photos, I am allowed one kitten shot. This gorgeous little fellow had found a perfect spot and the shop owner was happy because everyone stopped to look at her lovely wares. Kalkan.

The four of us were admiring this very well pruned olive grove, saying someone takes great pride in the pruning. Later in the morning, we saw a large herd of goats come down and they all stood on their hind legs to get their breakfast.  Goats can stand on two legs for quite a while.

Having fun here, off to an anchorage tonight.