Vancouver isn’t kidding when it talks about its harbors, it waterways and the great time you will have sailing in these waters. You do get rain and you also get plenty of sunshine.

After Pender Harbor, we motored off to Secret Cove with about half the fleet. Turns out that was our last Green Box on a dock, so the order of the afternoon were drinks and sharing nibbles and talking the sun down. Actually before sun set, we heard music and before we knew it singers were pouring onto the docks and we spent the next hour singing songs from Amazing Grace to show tunes to Carole King and Janis Joplin. Old MacDonald got a workout.

In the morning, we all sailed or motored over to Snug Harbor, a marina that is the last vestige of the Union Steamship Company on Bowen Island. A great marina with shops and a great pub called Doc Morgan’s who fed the whole flotilla and kept Canadian Geese as guard birds. 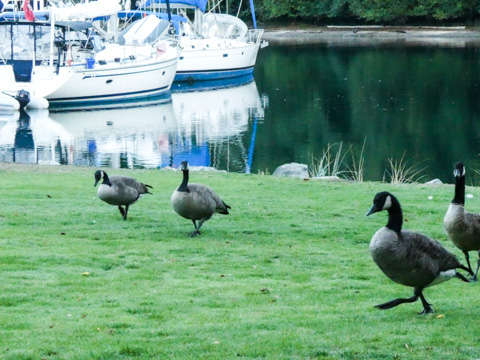 And so we finished where we began, at the Royal Van in Jericho Bay. We had an amazing dinner with singers and an old English Folk Song, we had “thank you”s and that we all had a terrific time was duly noted. We were asking when the next ICOYC cruise might be scheduled because it is something many of us would like to do again.

I have to put it in writing that the despite what you might hear, the Death by chocolate was not the highlight of the trip, but it was certainly in the top ten.