Our yacht, Mercier, is a Beneteau from Vendee, France and we met her in Bandol. So we were very excited to be asked to host French Families and friends of French Invictus Warriors.

Sydney Harbour is an amazing place to share with guests and we had a Invictus flag to get us an anchorage right at the Sydney Opera House. Frosty, James and I wanted to make sure we got the best viewing position for our guests.

We were able to watch the Invictus Elliott’s practice in Rushcutter’s Bay and we were able to cheer the French team on and take a few photos.

We toured around the harbour near the Eastern Suburbs and then followed the Elliotts over to Farm Cove.

The clouds disappeared for awhile and we had some very close racing. The weather was kind to us. There were blue skies and the wind was only a little bit chilly.

The wind was strong going into Farm Cove until the top mark, but lighter on the return. France had won the Gold earlier in the morning for Cyrille Chahboune’s in the Hansa 303 in the morning.

As loud as we shouted for the French team from Mercier, the Danish team were incredible up on the hill. The Dutch and the UK also had a presence in Farm Cove.

There were thousands of people on shore and in the water enjoying the Invictus Sailing. Our guests seem to enjoy the day too. We hope they enjoy the rest of their stay in sunny Sydney. Good luck to all the Invictus Warriors and their families. 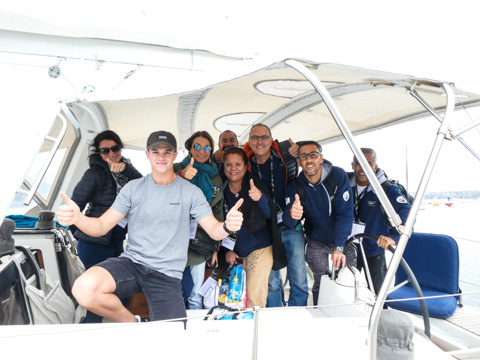