We were so lucky to have my sister move to Oregon.  It opened up a completely new area for James and I to explore.  There are no photos here of Rick and Linda because they were in the processing of moving to their new home. My sister advised me that it would be very boring to have photos upon photos of boxes.We changed our dates and went a few days early to help them move along with Rick’s father Larry and wife MJ, friend Kevin and then left them to unpack.

When we mentioned this change of plans to Barbara about our sudden lack of playmates in the Pacific Northwest, she volunteered to bring Frank and Adam and keep us company.

First stop was Seattle: Pikes Markets downtown and then a walking tour with Seattle 101. We had a great breakfast at the markets after watching the salmon toss and looking at beautiful flowers.

Seattle 101 walking tour was wonderfully entertaining and informative. Joe is a Seattle native and his passion for the city and its story was tremendous.

My favourite Seattle exhibit/museum is Chihuly Garden and Glass. It was a highlight of the visit to Seattle. It should definitely be on your Do Not Miss list for Seattle. Inside and out, Dale Chihuly’s creations are remarkable.

The following day we toured the Museum of Flight. It was another outstanding museum and I noticed the same look of rapture on Frank’s face that I saw on Barbara’s face at Chihuly. Here is why:  there were so many planes and rockets and exhibits. Prepare to spend the day here.

We had a quiet Fourth of July, watching the fireworks over Lake Union. The next morning we were up and ready to drive to Vancouver, Canada.

Here is the thing, we had a short window of opportunity for a taste of Vancouver and we spent too much time at the border crossing.  Think twice about going Seattle to Vancouver with just two days to stay. Vancouver is worth more time and the border crossing shouldn’t be the largest part of your experience.

We did have a great reunion with Marie and Simon Fawkes, who gave us great advice – “get on your bike”, so the next day we rode at least 15 miles to allow us to see as much of Vancouver as possible on rented bikes. The Sea Wall was fabulous, riding a fairly flat and accessible bike path allowed us to see much of beautiful, sunny Vancouver.

We literally biked until our legs turned to jelly. We would like to thank Washington, Vancouver and Oregon for good weather. We did have clothes for inclement weather but we didn’t need them. Weren’t we lucky?

A visit to New York is a visit to my childhood. The food and sounds are almost the same at the market and on the streets where I spent my first seven years. The great thing about living in NY was access to the Bronx Zoo, The Botanical Gardens and museums. There are an amazing amount of museums in New York City and this trip we visited two.

We met cousins Marian and Jessica at the Metropolitan Museum and chose three exhibits to view. The first exhibit was an ethereal series of Whaling pictures by the English romantic James.M.W. Turner. Where a realist’s images might have been gruesome, Turner’s froth and cloud hide the gore. Out of the waves’ foam, there struggles a ship or a whale. Our imagination takes us to sounds of sailors yelling orders and encouragement. Original manuscripts of Melville’s Moby Dick are displayed, which opens the discussion did Melville see these paintings before writing Moby Dick?

From Turner, we went to the Temple of Dendur, a temple moved from Egypt to the Metropolitan, when it was going to be flooded under the Aswan High Dam. Isis and Osiris now have a home in the middle of NYC. The emperor Augustus of Rome commissioned the temple which gives you a clear point in time of its age (15BC). It is remarkable that it was able to be re-situated from one metropolis to another. Egypt was very generous in deeding this gift to the United States, at that time represented by Jacqueline Kennedy.

The last stop for the day was the Manus x Machina, Fashion in an Age of Technology exhibit. It is more about the techniques and processes the 20th and 21rst centuries have brought to couture fashion. Exquisite, revealing in that the humble sewing machine began journey, made this possible and wrought incredible changes to how Couture was fashioned over the years.

The highlight of this visit was a young girl, visibly worshiping the dress that was designed by Karl Lagerfield for Chanel with a 20 foot train. She ran from perspective to perspective and had her phone camera going non stop and she peered into the detail of the embroidery, which had been crafted using such artful processes, so closely that the guard had to intervene. Such passion at such an early age. For me, it was this passion that was the highlight of the exhibit, you understand this passion is where the design comes from no matter the machines or materials.  These dresses come from someones mind and passion.

Another morning was in the Upper Eastside, spent at the Cooper Hewitt, Smithsonian Design Museum. Housed in the stately mansion of steel magnate of Andrew Carnegie, the building is a work of art itself. Building was begun in 1899, but this house featured a Otis Elevator, the first private elevator. Carnegie is one of my patron saints, because he gave huge amounts of his wealth to the creation of public libraries.

Two of the many exhibits that we loved were Beauty/Triennial with its emergent technologies, 3 D printings of ceramic and glass and the PolyThread knitted textile pavillion.

The other favorites is the story of the Haas Brothers and Haas Sisters and their whimsical figures brought together with technology, algorithms and hand sewing. Look this MonkeyBiz up, it is a wonderful partnership story.

Cooper Hewitt has a wonderful online presence. Check it out. 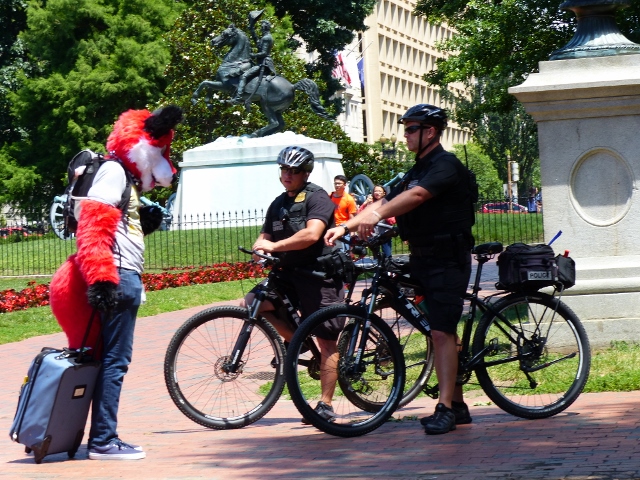