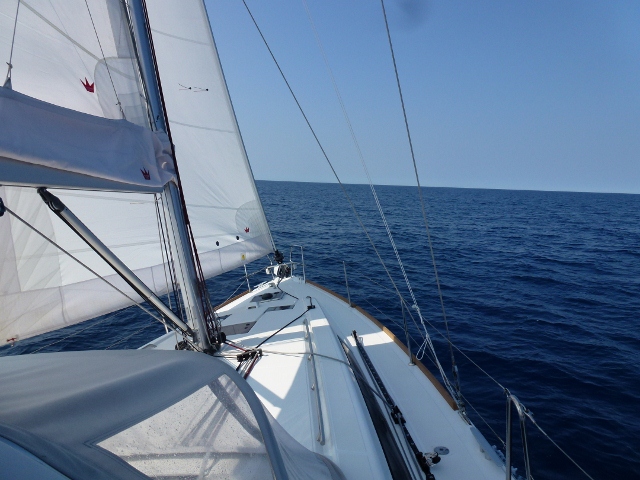 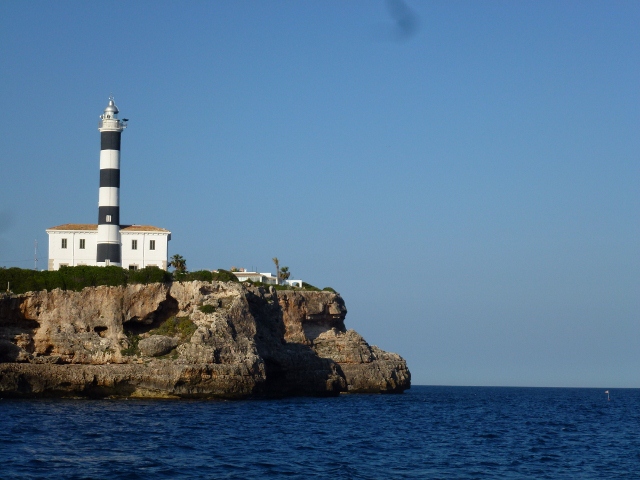 We finally received our safety kit, loaded it on board and returned the rental car. All ready for an early start on Saturday. We awoke on Saturday morning, ready to go, breeze was forecast as 20 – 25 knots from the east, so it should be an easy reach to Palma, some 300 miles away. We fuel led up at Toulon Old Port and motored out of the Harbour. The way out of the harbour was   upwind so we motored for about an hour until we could unfurl the jib (but only 2/3 out) We then set course for Palma, only to find that the wind had increased to 30 knots and it was very uncomfortable. Given that this was our first sail and we were still not familiar with the boat, we decided to sail to Bandol which was downwind most of the way. wind was now gusting to 35, so we knew we had made the right choice. Arriving in Bandol just after mid day, we went alongside at the Capitanairre and had to wait until 2pm for them to return. Thankfully they found us a berth and we then set about mooring the boat, wind was gusting up to 45 knots at this stage, so mooring her was quite a challenge, however we got lots of help from the boats either side and we managed to get in without damage. The harbour master was a great hand and the bow moors to a chain which is in permanently in place. After a nice dinner ashore at a locals cafe, we retired for the evening only to be woken at 3am by a bang – the bow line had chafed through in the windy night. Managed to re-moor and go back to sleep. Looking at the weather forecast it appears we will probably be here for another night.

Bright and early this morning, James was up and applying the signwriting to Mercier, first the Squadron Emblem, then the name and finally Sydney.  There were a few expletives, although most were muttered, so as not to scare the neighbours.

Today was a public holiday, so no boat business, we decided to revisit Aix en Provence. Arriving at lunchtime, we strolled through the colorful market without buying to get to a lovely brasserie for a meal. This market has homewares, mainly linen as well as women’s clothing and shoes.

After lunch the markets were closed but we were able to walk  around the old town and see a few shops open and look inside, many others were closed, but the people watching was fairly amazing.  Three young men walking around in white lab coats with painted formulas and pictures, singing and hooting and generally having a good time. Crowds of tourists and holiday makers filled the streets, which are mainly pedestrian thoroughfares.

As we were walking down a busy street full of pedestrians, I noticed a young girl about 3 years old.  Very confident and curious, Mademoiselle 3 was having a grand time.  We thought it was odd that she didn’t follow her Mother into a shop, but thought she was near other family.   A few blocks later on, we realised she was still beside us and we began to realise she was lost. Even a confident 3 year old shouldn’t be walking around Aix on her own.  So I said Ou est Maman? I went blank on my French and told her to come with me with hand gestures.  We retraced our steps and about two blocks back we see a lady running and looking frantic.   Mademoiselle trois, who gave a shout to her very pregnant mother, who burst into tears as soon saw little Ms 3 year old.

A happy reunion and also happy for us, because we were worried even if Mme 3 wasn’t.

We finished up in the Park at La Seyne Sur Mer for the Salon Espirit du Vin, which was an exposition of wines from the region, France, Alsace and Corsica.  We tasted several and bought a few for the Mercier cellar. They also had  lots of truffles, condiments and foods from the same regions.

All in all, even though it wasn’t a boat day it was very enjoyable.

Remember reading A Year in Provence? The chapter when they are trying to renovate and the materials are always coming the next day or the next…  We are experiencing our own bit of laissez-faire here because the safety pack didn’t make it.

Tomorrow is a holiday, so we are stuck in limbo until Friday.  Maybe we will take a jaunt up to Chateau neuf de Pape? And Aix en Provence will be close by. The wind makes the boat strain and dance to  St Vitus’ tune.

Tonight we will dream of sailing to Hobart, but at least we won’t be on the weather rail. 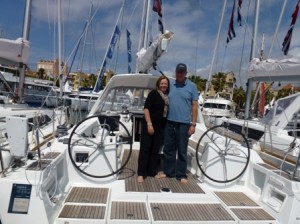 Well we bought a boat – a near new Beneteau Oceanis 41 which is hull number 1 of this series of boat – it has had a fair amount of use as it was used in the brochure, and has been to 4 or 5 boat shows. Getting down to the basics, it is amazing how much is required to start getting a new boat equipped. As this was a demo boat there were a number of things which still needed to be finished before we can set sail. We have spent the last 4 days in a village called La Seyne Sur Mer near Toulon which is a bit industrial, but still lots of boats here. We have to take the boat on a 2 day journey to Palma to have a few final details finished. Even before this we need to add a pallet of safety equipment and then there was the radar which had not been installed. Simon from the Sunbird dealership, is being very supportive, proactive and has helped us move through the list and get some faults corrected.  Watching them put up the radar in some very wild winds was nerve wracking but the team of people putting it together were very professional and also helpful with a few other items like getting the Mp3 to run through the sound system.

We are naming her, Mercier, which was Grandfather Merrington’s first yacht and being a French name, seemed to fit. We considered  Bandol Rose, but we think there may be a few boats with that name and tradition won the day.

Speaking of Bandol Rosee, the local wines are very tasty and light. If we are running errands around lunch time and just have a mineral water, the waiters are terribly despondent and can’t understand how we can have our lunch without the necessary libation.

We are making progress – can’t wait for the sail to Palma.

When you are planning for a trip like this, there is so much to consider, where to go, what to see and how to get there.  We have a very open plan, inspired and informed by our Bucket list.  In the 80’s, we went through a series of five year plans.  Later we had a list of goals: personal, home and career; we have always had lists, especially shopping lists but now we rely on our Bucket List.

It’s the list of places we would like to visit, experiences of which to partake and adventures waiting in the wings for us.  The Bucket list is as much about the developing the plan as it is about savouring the experience.

Inspired by the Treleaven’s book “Letters from the Med” we are venturing to Europe in early May where we will start looking for boats in the south of France and other places. Once we have found a suitable boat,  the adventure begins